So, news of Hurricane Sandy is everywhere. People here at school are constantly checking to make sure their parents are still ok. It's a constant prayer request in classes and front and center in everyone's minds. Please, people that are being affected by this storm, know that I am praying for you. And this blog post is in no way trying to make light of what you are going through. If anything, it is meant to be an encouragement for you.
Remember Matthew 8:23-27?  The disciples and Jesus were crossing the sea when a ginormeous storm blew up around them. The disciples were used to this sea. They had grown up on it, and before Jesus had called them, some of them were fishermen on this sea. Their lives depended on knowing this sea and how to survive storms. But this storm was different. They were freaked out by it. They had never seen anything like this storm--they were sure they were going to die. They forgot everything but surviving. They even forgot what they knew about God. Yes, they lived with Jesus for 3 years. They saw Him heal the sick and raise the dead. They watched Him with His family and friends. They saw Him in His personal time with the Father. They watched Him when He was hungry, thirsty, sad, and tired. They knew Jesus better than any person on earth. They knew that He cared about them and would protect and provide for them. But all this knowledge flew out of their heads when the storm hit. They ran to Jesus, accusing Him of not caring that they were about to die. If they had thought about this, they would have remembered. But they were to scared to notice. To remember. Jesus gently rebuked them. He turned their focus back on Him. He asked why they were afraid. He was there. They needed faith in Him. Because God would never let them down. Then He calmed the storm. I love the disciples response. "What manner of man is this, that even the winds and the seas obey him?" They saw the awesome power of God manifested in what was the worst storm they had ever encountered.
So many of us are going through storms in our lives. For some, it is a very literal storm--pounding your home, your family. Hurricane Sandy is huge. Over 385,000 people have lost power. The wind is over 175 mph at times. I saw one statistic that said 60 million people were or will be affected by this hurricane. It's literal. It's huge. And it's scary. And there is nothing we can do about it. Matthew 8 tells us, though, that even the winds and seas obey Jesus. Job 36:27--For he maketh small the drops of water: they pour down rain according to the vapour thereof. God is in control of the weather. He is using this storm for His glory.
For a lot of us, though, the storms we face aren't literal floods and storms. It may be a best friend turning from God, death of a loved one, church split, parents not understanding, a disease, situations out of our control, or failing grades. I dont' know what you are facing. But God does. And in the storm, remember, He controls the water.

1. Don't focus on the negative. Look at the situation and try and see the best. I know this isn't always possible. But God is using every trial--every storm--to conform you to be more like Jesus Christ. 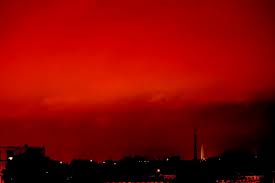 I love this picture. I mean, it is so beautiful. There is no colour filtration or anything going on. This is a legit picture of the sky right before Sandy hit. I found several other ones similar. This is at dawn (remember, red sky at morning, sailors take warning). This picture is bad--there is a major storm coming. But look at the beauty.  I mean, the gorgeous colours.
Or the next picture. With the statue of liberty. I mean--this is major creepy. Especially if you live in that area. The storm is coming up. I found pictures that showed waves as high as the base of the statue. But, this picture--I'm not sure what exactly what it is. But seeing the clouds behind the statue and the light and darkness . . . . it is just so gripping. It reminds me of just how powerful my God is. Because even the statue looks vulnerable in this picture. 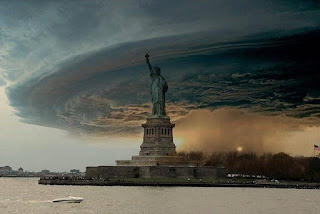 Lastly, just a reminder. Turn to friends. God didn't intend for you to live the Christian life solo. When you face these storms, that's when you especially need someone to come along side you and help you refocus on God. It's so easy to focus on the individual waves. Like Peter did when Jesus called Him to leave the boat and walk on water. He was doing well as long as he focused on Christ. As soon as He looked to the side, he saw the waves and panicked. Christ had to come alongside him, pull him up, and help him get back in the boat. Find someone you can talk to, tell them what's going on (being honest), and ask for help. Go to someone that isn't going to just make you feel better or feed your bad mood. Go to someone that can point you to God. 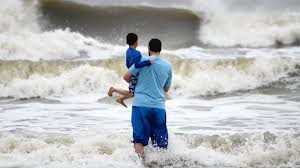