Hopelessness and the Resurrection

It's an odd title. For Easter.


For all my BJU friends and those in the surrounding area, you are familiar with Living Gallery. Every year, Bob Jones puts on this amazing production for Easter. They take paintings like: 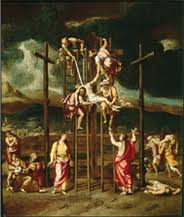 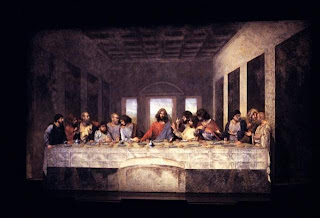 Looking at these, you assume they are the original paintings. But because BJU goes beyond normal, they take these paintings and recreate them to be life-sized. Each of the people in these paintings are real people. They take out the paintings and put in real people. I could never do that. I'm ADD. Stand in a painting and look like a statue for long periods of time? No way. I just don't have the patience or skill. But people do it. And it's absolutly incredible. It's breath taking. If you have the chance, you should really go see it.

Normally, there is a drama that accompanies the art.It highlights the gospel and usually involves a dramatic conversion on stage. This year, they did something different. They had monologues of people who "observed" the crucifixion. People who "knew" Christ. I wasn't sure how I felt about that before I saw it. I like the drama. It's always really cool, and I just like acting and all that. Monologues are cool, as long as they are part of the drama. But then I saw them, and my opinion totally changed. I was overwhelmed with the emotion conveyed on the screen. They portrayed the characters in a way I never would have thought. The actors made the person come alive. They seemed real. People like Peter, the Samaritan Woman, Pilate, the Pharisees, Nicodemus, Judas Iscariot, and others. They are a part of the story, but they were people. They had feelings and emotions. And they were going through something very few of us could imagine. There was one major feeling that most of the people on stage communicated. That I picked up on.

All the characters on stage were totally lost. Well, most of them were. The Pharisees--not so much. But even Pilate felt lost and alone. Somewhat. And the audience, while watching, was supposed to feel that same overwhelming sense of hopelessness. Jesus was dead. He died. He was the promised Messiah. He was supposed to save us from sin. Give us eternal life. He was the Son of God. And now, all these people watched Him die.

They watched His body come down from the cross and observed His hasty burial. Guards stood around the tomb in case someone would try to steal the body.

They wanted to believe. So much. But what could they believe in. In all practically, Jesus was dead. He had told them this would happen, but they had refused to believe it.

Probably the best and most compelling monologue was that of Peter's. One of Jesus' inner circle of friends. Known best for doing stuff without thinking. For being impetuous.

In His monologue, he looks up and screams, "WHY!?!?! I feel so guilty for betraying you. For denying you. But you betrayed us! You left us!" The audience was absolutely silent. I never pictured Peter as being angry with God. Weeping bitterly? Sure. The Bible says that. But screaming at God and accusing Him of leaving Peter alone? I had never thought of him as doing that. But don't we all?

We feel abandoned by God.

Even hopeless. No matter what happens, our life will never be the same. There is no point in going on. Of serving God. We feel that He has left us to fend for ourselves in this world. And we can't do it. We can't keep pushing forward.

HOPE!
Jesus is alive. He conquered death. Sure, He died. He had to die. But then, He rose again. He defeated death--it will not have dominion over us. Because of Christ's sacrifice, we can have Hope. Because of the resurrection, we don't need to live in a spirit of hopelessness.

Jesus understands our suffering. He suffered. More than we will ever go through or could ever imagine.

When it feels like we are all alone, remember this:

Jesus was all alone. One of His closest friends sold Him. Another of His best friends denied that he even knew Jesus. All those that knew Him best fled in fear. Then the unthinkable:

God turned His back on His Son. His "Only Begotten Son" (John 3:16). Jesus cried out, in anguish,

So when you feel completely alone, remember 2 things.

1. Jesus knows how you fell--He was completely alone.

2. You aren't completely alone. He has promised, "I will never leave you nor forsake you" (Hebrews 13:5).

Because of Christ's sacrifice, we have hope. Hope of a home in heaven and eternal life.  Hope of forgiveness of sin. Hope in victory over death. Hope of so much more. And this isn't a casual hope, like "I hope it won't rain tomorrow". This is a sure hope. It's a promise from God.

We don't need to live in a state of hopelessness. We CAN have victory.