What motivates you to live your life the way you do?

As Christians, we are called to live a life that is pleasing to God. He has called us to do certain things and not do other things.

Why do you do what you do? (No, this isn't a rehash of this post). I mean, what motivates you? You get up each day and make choices. Why do you make the choices you do?

Pastor was preaching on Sunday evening from Luke 18 and 19. I've been reading the gospels in my devotions recently (finished Mark today). I've been reflecting on all Christ has done for us. He left Heaven, where He was respected and had everything to come to earth, where He had nothing and was cursed, spit on, and treated worse than a servant. He came to earth to serve, when He was used to being served and worshipped in heaven. Not only that, He travelled for 3.5 years teaching, preaching, doing miracles, and sharing the love of God, knowing that He and His message would be rejected. If that wasn't enough, He suffered horribly and was ultimately killed. Why? Well, because the religious leaders didn't like His message and were threatened by Him. But was that the real reason? They didn't take His life. He gave it up. Jesus Christ, the Son of God, the Creator of the Universe, Ruler of Heaven, gave up His life.

Because He loved us. And wanted us to have the chance to live eternally with Him.


Wrap your mind around that, if you can.

What a great God we serve. We as Christians have the opportunity to give our lives to God. In fact, Romans 12:1 says that we should "present our bodies a living sacrifice, holy, acceptable to God, which is our

It just makes sense to give Him our lives.

That was a really long introduction. I'm sorry. It's late and I'm rambling. But I promised someone I'd write this tonight. So I'm writing.

We as Christians are motivated to serve God by basically 1 of 2 things: grace or guilt.

We can look at all Christ has done for us, and make it all about Him. Because of His sacrifice, because of all He has done for me, I can give Him my life. He allows me to serve Him, and I am blessed with so much, it just makes sense to give it all back to Him. That's grace.

Guilt says "I've messed up. I know I've been saved, but I've done a lot of bad things and I want God to love me so I'm going to work really hard to be a 'good Christian'." We know we're saved by faith in Jesus Christ, and not through works, but often we don't live like it. Or maybe it's just me. I don't live like it. I spend a lot of time feeling like I've made mistakes and I have to fix them. I have to work to earn forgiveness somehow. We know God is "faithful and just to forgive us" (I John 1:9). So why do we live like we've messed up 1 to many times and He may not forgive us if we make another mistake? To say (or think) that God can't forgive us is saying (or thinking) that the cross was a waste of Jesus' time. Am I wrong?

I don't know how to define being motivated by guilt. I would say that a sign is "consistently feeling like a failure". Thinking "I keep messing up and I fail at life". Feeling like you have to earn forgiveness. Giving up. Telling yourself "I'll never succeed, so why keep trying?".

If you've read my blog much at all, you know Peter is one of  my favorite Bible characters. Mostly because I can understand his whole impulsive thing and a lot of his other character traits. Remember when he denied Jesus 3 times before the crucifixion? Not a high point in his life, I'm sure. The Bible tells us that he went out and "wept bitterly". After Jesus died, Peter went fishing. Earlier in the gospels, 3.5 years earlier, Peter had left everything and followed Jesus. He gave up fishing to spread the story of the Kingdom of Heaven with the world. He vowed he would never leave Jesus. Then he messed up.

He majorly failed. He denied Jesus--the one who, not long before, Peter had declared as "the Christ, the Son of the Living God". He failed, and left it all and went back to fishing (John 21).

I'm going to speculate a little. This isn't in the Bible. This is just me thinking the way I usually think (coming from the frame of reference of one who is motivated by guilt and failure all too often).

Peter knew fishing. He knew the fish and the sea. He was confident in his fishing skills there, and the fish wouldn't care if he cursed or denied them. He couldn't hurt anyone the way he had when he was following Jesus. When Peter was being motivated by guilt, he gave up. He couldn't serve God the way God planned.

When Jesus showed the depth of God's forgiveness to Peter on the beach, and when Peter really grasped the concept of the unfathomable grace of God, his motivation changed. Suddenly, it wasn't, "I have to do this because if I mess up again God will never forgive me." For Peter, it became "God has given me so much and I want to serve Him with my life!"

Peter's life changed. God's grace changed Him. And it has changed my life. As a Christian, everything I do should be for God's glory. Not because I'm scared of punishment or need to earn forgiveness. I can't earn forgiveness. But God gave it (and continues to give it) to me anyway. And I can never lose His love, no matter what I do. 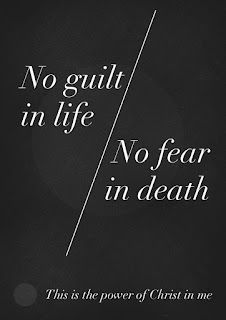