I Will Build MY Church

On Thursday, March 6th, 2014, the Washington Times reported this headline: "Kim Jong-Un calls for execution of 33 Christians". Basically, 33 North Korean Christians and a missionary from South Korea were arrested and sentenced to death for starting over 500 house churches in North Korea. Has the execution happened yet? I don't know. Is the report completely and totally accurate, without fabrication and/or hidden information? I don't know. But I do know that God is in control. He holds each Christian in the palm of His hand. He sees the future, and He has a  perfect plan for each person individually, as well as for the collective body of Christ. I can rest in that.
I don't know what He's doing. I don't understand. I look at what's happening in North Korea, and to Christians around the world. If I am not careful, I may wonder:

Do you find yourself thinking this? Please tell me I'm not alone in my thoughts. In my doubts. I know God is good. I know God is in control. But when you see headlines like the one above, you stop and question what's going on. What God's doing. Or at least, I do.

What is God doing?

In Matthew 16, we see a lot going on in the ministry of Christ. At the beginning of the chapter, the religious leaders are there testing Christ. Trying to get Him to slip up.
Then we see Christ talking to the disciples. He asks them who people say He is.
"13--When Jesus came into the coasts of Caesarea Philippi, he asked his disciples, saying, Whome do men say that I, the Son of Man, am?
14--And they said, Some say that thou art John the Baptist: some, Elias; and others, Jeremias, or one of the prophets.
15--He saith unto them, But whom say ye that I am?
16--And Simon Peter answered and said, Thou art the Christ, the Son of the Living God.
17--And Jesus answered and said unto him, Blessed art thou, Simon Barjona: for flesh and blood hath not revealed it to thee, but my father which is in heaven.
18--And I say also unto thee, That thou art Peter, and upon this rock I will build my church; and the gates of hell shall not prevail against it.
19--And I will give unto thee the keys of the kingdom of heaven: and whatsoever thou shalt bind on earth shall be bound in heaven: and whatsoever thou shalt loose on earth shall be loosed in heaven.
It's a pretty familiar passage. One I've referenced before.I've studied this passage (both personally and in classes and church). A lot of times, we talk about verse 18 and talk about the phrase "upon this rock". What did Christ mean there? People and denominations debate this. But I want to look at the next phrase for a second.

I
Will
Build
My
Church

It's Christ's church. He has promised us that He will build it. No North Korean dictator can stop Him. No American bashing God on YouTube will stop the spread of the Gospel. Nothing you can do will stop what God is going to do. 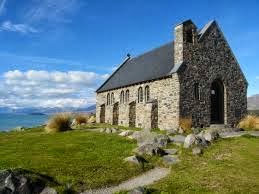 Isn't that encouraging? We can look at the world and see what's going on. We see the political turmoil in Ukraine. We see the atrocities committed in North Korea. We see the unrest around the globe. We wonder where God is. What He's doing. But nothing that Putin or Kim Jong-Un can or will do will stop God from doing what He has planned.

I just think that's so encouraging.

I serve a God that is bigger than all the politics in the world. Literally.

He's above it all. He controls it all. And works it together for His good. For His glory.

In the death of these 33 Christians, He will be glorified.

I pray that in my life, however long He has planned for me, that He will be glorified.

Carl Moeller, president of Open Doors USA, spoke about persecuted Christians around the world. He said this: "They don't ask us to pray that persecution would stop. They pray, instead, that they would be strong in the midst of persecution, and to empower them to be bold witnesses despite the obvious persecution in many places."

This is a huge rebuke to me. I have a low pain tolerance. I'm sure I'd be begging for them to stop the second they looked at me. I'd like to think that I would stand fast and never give in, never renounce Christ, but I don't know. How can any of us know how we'd respond in a situation like what these Christians face on a daily basis?

All throughout history, the persecuted church grew quickly. It spread like wildfire. And those Christians that faced persecution often had the strongest faith. From the early church up until the present day, those that face persecution know what it means to really depend on God.

Please join me in praying for the persecuted church around the world. Pray with me for our brothers and sisters in Christ as they press on through the trials God has allowed into their lives. Pray, not the persecution would end, but that God would be glorified. That the Gospel would be spread throughout the world. That the church would not be stamped out, but that God would build His church. Like He's promised. He will build it.

He will be glorified.

I can rest in that.

(Here's a sermon that was preached here on campus last year about this topic by Chris Anderson. If you have time, may I suggest and recommend you listen to it? It's highly encouraging.)
Posted by Unknown at 5:34 PM